Round Nine challenge for Outside Participants is to incorporate the following:

Four streets from the Dead Zone the PDA bipped. Sylvie slowed and considered her options. She could risk the denizens and drug dealers on the street, ease into the curb or keep going and hope she didn’t come across a lone police car while reading behind the wheel. In this part of the city, with boarded up windows, rows of shoes slung over the electrical wires and regular patrols either was as likely.

Knowing it would be an update, she stopped. Reaching across for the PDA her eyes caught the reflection of a car, a few blocks back. It slowed and the headlights dimmed, the after glow of the bulbs illuminating the blackness for a few moments. Sylvie waited for someone to get out or get in, but nothing happened.

To her right another car rolled to stop in a side street and the headlights were killed. The PDA bipped again. The screen lit up when she touched it and the words “URGENT: HOAX” leapt out at her. The hair on the back of her neck prickled.

Still no movement outside. She rested her head on the steering wheel and thought about Doug’s phone call. Even in one of his most selfish moments he would never have accused her of the things he had. In a sickening moment of clarity it all became clear. Doug’s call had been a ruse. She’d been traced.

Sylvie slammed the heel of her hand into the wheel cursing. The sharks were circling, waiting to move in for the kill. Had it not been tonight, it would have been tomorrow or the night after. The agents must be congratulating each other on their luck. She was glad she was alone.

But she refused to be easy pickings. Fuck them!

She jumped out of the car, opening the back and pretending to prepare her midwifery gear. Instead she found the wheel brace and jammed it beside the oxygen bottle in the suitcase. Throwing the unlocked suitcase on the back seat, she climbed in and locked the doors. Using as much momentum as the small space allowed, Sylvie smashed the wheel brace into the dashboard, shattering the navigation screen. She kept hacking until it was a tangled mess and she was certain the GPS had been knocked out permanently.

Keeping the headlights off Sylvie started the engine and invoking a prayer of protection, eased the accelerator down, rolling along the gutter as slowly as possible, putting inch after inch between her and her pursuers. At the end of the block she held her breath, slammed her foot down and sent the SUV hurtling down the street towards the Dead Zone.

31st of October and the closest I’m going to get to Hallowe’en is the pumpkin on my NaNo pass from the Kick of Party today (I’m making a conscious effort to bouycott the American buy in and instead raise a glass of Wiccan brew to celebrate Belatane instead).  The pass comes with some useful information inside including a calendar of November with all the write in listed for the Brisbane/Gold Coast area. It was also an excellent icebreaker and a way to remember peoples’ names.

I really enjoyed myself at the KOP this year. Last year I was just overwhelmed to be among so many strange faces – and so many young faces at that. I felt ancient. This year I didn’t feel a whole lot younger -but I found some awesome people to talk to – thanks Kegan and Lenny. I left before I had to stand up and share what my story is about. Not because I didn’t want to stand on the seat and share – but because I was mindful I was out by the good grace of my family and November is a LONG month for all of us.

So it’s the night before the big event. Last sunset before the madness. Last meal. Last sleep. Hopefully though not the final blog entry. 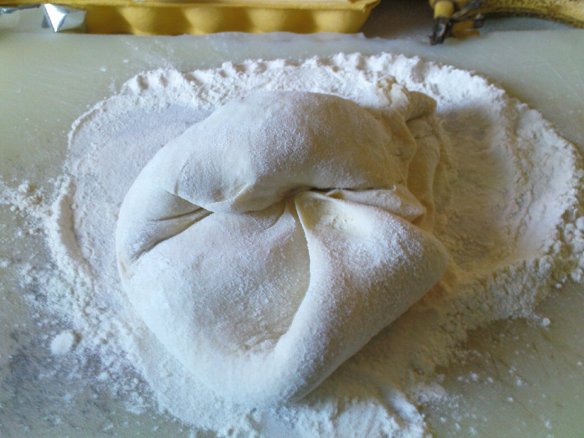 When I had a bread maker I used to regularly make dough on a Friday afternoon before going into the city to pick Dave up. The agitator bit in the middle of my bread maker (the important bit) went missing months ago.  So I fell out of the habit of making the dough because I needed to knead by hand.

Decided I would get back into the habit – so here’s my dough. I think kneading will be a good meditative practice for NaNo – for fixing plot difficulties.

As I’m typing the pizza is cooking.  Mine has chorizio, purple onion, capsicum and danish feta. Yumbo!

This is where I ended up as of about 4:00pm.  Had a nasty head ache coming on, sore eyes and well … you get it. I think at one point I had a weird out of body experience and woke up thinking about Isis’s story from Fourth Fiction. Long gone but definitely not forgotten.

I’m off to have a coffee discussion about the possiblity of me doing some paid writing – web content – for a local company here in Brisbane. It was a referral from a twitter associate. This was well timed as I was able to point out to my partner, Twitter is in fact not a waste of time and I am a sensible user of the social platform (I’m not sure just how much mileage I will get if I keep pushing this point though.)

Yesterday I collected up a folio of my web writing to date – outside of blogging.  This is where I had the terrible stabbing moment of realisation – if I was going to be honest about all the work I had done – Reclaim Sex After Birth was going to need to be in there. I never envisaged at the time of creating RSAB I would be using some of the content on the site to sell myself for a paid job. As Paul pointed out though – it shows I can write with maturity and without embarrassment on any subject.  That is true … but I will feel a tad uncomfortable about presenting it.

November is probably not the best month to be taking on any additional work, but I have my eye on the future.  Phil is planning on moving out in three weeks so that will be the last we see of his rent money. Dave also took a massive pay cut when he got his new job. And there’s Christmas coming up – which also coincides with a raft of birthdays, a wish for us to go to Victoria for part of the summer and our car registration.  So the money obviously wouldn’t go astray.  And furher into the future – Dylan is at school full time next year, which means bigs shifts and changes for me, and the amount of time available to me every week. If I “worked” two days a week, I would still be ahead on the available time I have at the moment.

I will put my best foot forward and try not to be swallowed up by either embarrassment or nerves.  It is seven years since I last was interviewed for a job (a Xmas position at The Body Shop) and I last worked for money six year ago in a PCYC vacation care programme.  I have it very clear in my mind why I would want this work – and it is not entirely about money, but a lot to do with networking, meeting other people, working outside of the home and the satisfaction which might come from it. After all – it has to be better than creating content (for free) for others to grow their internet empires. It wont be forever … eMERGENT will one day soon be pulling us in an income.

Getting up earlier than everyone else in our house means one thing – lots of cuddles when Dylan gets up.  This is us squashed up at my desk having snuggles as Dylan blinks awake. And to prove I don’t take myself too seriously – here is a less than salubrious photo of moi! At least I’m showered and out of mh PJs.

One of the things I loved most about being a Mum is seeing my Dad and Dylan together.  It gives me the burst in the chest sort of feeling.  And Dylan loves his Poppy – he’s the next best thing since sliced bread in Dylan’s books.  Almost better than Ben 10!  Here we see them at Vangelis in Ascot doing Veritech puzzles together. We stopped off for lunch on the way to the airport.

Dylan’s already planning his next lot of adventures with his Poppy in December.