The Hartog series of stories are set in a near futuristic world as a cross genre exploration of speculative fiction and detetive noir.  A list of episodes to date can be found at the bottom. 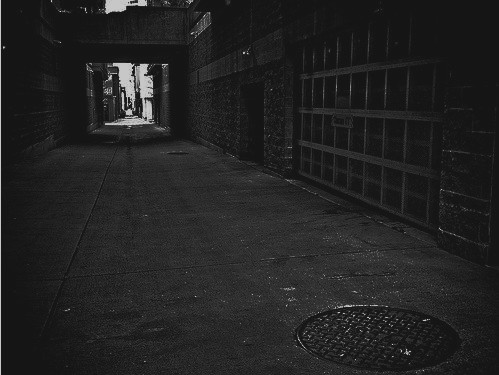 The taxi door shut followed by cheers and booing, drifting down into the canyon of the road from the apartment buildings.

Hartog was glad to be out of the taxi. The digital air freshener dispensing an invigorating spray of pine every three blocks combined with the plastic slip covers on the seats and foot wells left him feeling as though he were transiting in an artificially, fragranced body bag.

The taxi eased down the lay-in, waiting to re-enter the flow. A space appeared, the tracks moved to connect and the taxi merged into the slow lane joining others taxis moving across magnetic repulsion rails which crisscrossed the city.

Taxi was a hangover terms related to the concept of individual public transit. While the body shape was similar to the now defunct car, the taxi Hartog had just stepped from would never shoot down a side street looking for a short cut. All taxis were fixed into a locked transport grid. Here on an arterial there were three lanes of taxis, each lane moving faster and stopping less.

Big fares were not made in the slow lane and Hartog wondered how any driver piloting there could make a living.

Home was three block away and now Hartog wished he’d continued on rather than getting out to walk and clear his head. The night air was heavy and moist after the airconditioned overkill of the taxi. Sweat ran down the back of Hartog’s neck, pooling and soaking the collar of his shirt. Even the Stadium with its 70,000 bodies crammed sardine-style was cooler.

Hartog walked beneath the halos of the solar-powered streetlights, berating himself with the same line of thought.

Over- confident. The hard work of the set up undone.

But Benjamin recognised the InfoCap.

It didn’t matter – he’d lost the upper hand. Tomorrow Benjamin, on his home turf, would be calling the shots.

Victorious roars descended through the night air, and up and down the street like an audible Mexican wave.

Hartog looked at his watch –five minutes left of the derby – or maybe longer if they went into overtime. Did derby have overtime? He didn’t really care now. He’d only learnt what he thought was necessary and now he just wanted to sleep.

Sleep deprivation put you in the path of stupid mistakes and he wasn’t going to be the roadkill of bad decisions again. Sleep then he would be able to deal with Benjamin tomorrow.

Hartog crossed two streets and was almost home. He paused at the alleyway between his building and the next. It was habit now, so on the nights when he returned home unburdened he was reminded the city was still a dark and murderous beast, even where the ‘nice white people’ lived.

For the past few months the alleyway had been empty, since they hauled the hopper at the end away.  But tonight, like that night back in April, there was a body hunched halfway along blending with the shadows. Hartog went into the alleyway slowly, trying to be quiet.

“Joe?” he called. The shadow against the wall moved slightly. “Joe?”

When he got to the end of the alleyway he recognised the coat. Hartog pressed his head against the cool concrete blocks wondering what to say.

“What are you doing here?” he said finally.

“You know you can’t sleep here.”

“I slep’ here for months ‘fore you stuck your nose in my business.”

Joe’s words were slurred and the smell of cheap scotch rose pungently from him.

Hartog bent to grab the man who shrugged him off.

“Thought you going to give up the grog, getting a job. What happened to hostel room I organised for you.”

Hartog bent down and dragged the man to his feet.

“Not in my neighbourhood you don’t.”

Vagrants were tolerated in other districts of the city, but no one in the First slept rough. If you did, you weren’t on the streets long. Hartog knew Street Patrols who took delight in beating the homeless to death. It had been the hopper at the end of the alley which had saved Joe originally.

The two men wobbled in a drunken pas-de-deux until Hartog got a strong arm around the man. They took a few faltering steps together and the old man began to cry. His sparrow shoulders shaking violently as the sobs tore through him. Hartog propped him up against the wall.

“Pull yourself together. You can sleep on my couch tonight, but the doorman won’t let you in like this.

“No… I wen’ to see my daughter today.” The words came out in between each sob, sounding as though they were strangling him on the way out.

“That’s good Joe. This was what you were working towards. Putting your life back together. Everyone has bad times, and then you pick yourself up.”

“No,” he shook his head and the paper-thin hair falling into his eyes. “No’ wiff my daughter.” He started to cry again and the words blurred into one another. “She tol’ me ta bugger off. Tol’ me if anyone eva foun’ out her father wa’ homeless she’d neva have a chance fo’ pro-pro-motion. She’d be bl-bl-black li-li-listed.”

The man dissolved into long weazing sobs and Hartog waited while the emotional tempest raged.

“So your daughter hates you,” Hartog pulled Joe from the wall and gave him a shake. “Never let the poison of a someone who is meant to love you get under your skin.”

Joe tried to push Hartog away and fell to the ground. “Jus’ leave me Mis-tar Har-tog,” the words were once again broken apart by sobs. “Led’em fin’ me here. It can’ be any worse than this. I’d be beta of’ dead.”

Hartog hefted him to his feet again.”

“Not on my watch you don’t. C’mon. It’ll look better in the morning. It always does.”

Other installments in the Hartog Series:

In the Whorehouse (Part 1).

3 thoughts on “Friday Flash: Redemption in an Alleyway”