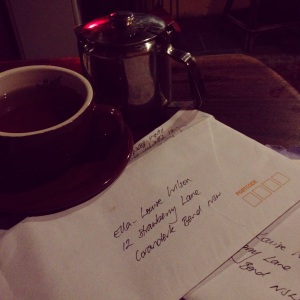 Throughout my teenage years I was a prolific letter writer. Partly to do with being uprooted half-way through Year Nine and shifted two states away from my friends. Partly to do with love of, what I consider, the most elemental and personal of narratives… and there’s nothing like the captive audience of one who puts everything on hold to sink into the world on your page. Letter writing has always been my first and dearest love. But over the years I’ve got increasingly busier, there’s email (and now Facebook) and opportunities to connection via the handwritten page are few and far between. This year I wanted to change that.

For three years I’ve carried around the concept of a fictional letter writing project. I wanted it to be a collaborative project, written with a male writer (if possible). Despite an awesome posse of male writing friends, I hadn’t found the right person to share the idea with.

Then on New Years Eve last year, I met Adam Byatt for the first time off a computer screen. And it was like we’d been living next door to each other forever. I knew he was the one I wanted to explore this concept with. I had a bit of a fish to see if he had the same affinity with letter writing and found he did, and almost a week later, standing waist deep in the ocean at Brunswick Heads (with three children splashing and screaming) I pitched #thesecretproject concept to him. No characters, no setting, no narrative arc. Just this idea of a collection of fictonal letters.

Rapid fire text messages across several days solidified it as a ‘yes’ project and for the past two and a half months we’ve been writing the opening section of the project. There have been hints, the odd photograph and a wee bit of speculation as to what it might actually be… so yes, Laura Meyer, you were correct. We have been penning letters all this time.

To be launching my own writing project is an absolute thrill after so long in the writing wilderness. And this is a project I’m particularly enamoured with (and no–it has nothing to do with Jude Smith!) because it has at its foundation, the most personal of narratives–the letter. It’s been a pleasure writing with Adam who is not only a dynamo and would make an awesome personal assistant (it’s like watching a mirror image of myself on Google Docs!), but because Adam is an incredibly talented dude with an incredibly promising future stretching out in the not too distance. It is an honour to write along side him.

In December 1992 Ella-Louise Wilson boarded the Greyhound Coach for Sydney leaving behind the small coastal town of Piper’s Reach and her best friend and soulmate, Jude Smith. After twenty years of silence, a letter arrives at Piper’s Reach reopening wounds that never really healed. When the past reaches into the future, is it worth risking a second chance?

Post Marked: Piper’s Reach will launch Tuesday 10th April and will roll out one letter a week for the foreseeable future. Each week one letter will be available on the website (still secret–sorry!) as plain text or a downloadable PDF handwritten letter.

But we need your help. We’re looking for some lovely friends to invite us over (between Monday 2nd – Monday 9th April) for a cuppa (we’ll bring the cake) and a chat about Post Marked: Piper’s Reach. Given it’s been secret up until now, we’ve assembled a few points of focus so we don’t have to sit there and comment on the weather (Piper’s Reach is known for its epic storms) or politely smile and twirl the bone china cups on saucers in lieu of conversation:

If you are interested in having us over… please leave a comment. I’m told our minions will get back to you.

8 thoughts on “The Secret Project Unveiled”