Rather than bore you readers rotten with a succession of catch up posts on what’s been going on, while I’ve been squirrled away behind the scenes, I’m taking a leaf out of Paul Anderson’s book and presenting an omnibus of news.

DECK THE HALLS: festive tales of fear and cheer

I feel like busting out the mid 80’s Fourex tune every time I think of this project (you know “they said you’d never make it, but you finally came through”). The good news is the anthology goes to pre-sales this Friday and launches Tuesday 10th July. For those wondering why the hell a Christmas anthology in July… Christmas in July is sort of a big thing here in Australia. This gives the anthology a soft launch here and then an international launch in late November. 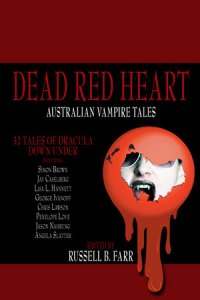 Ticonderoga Publications’ massive Australian vampire-themed anthology took out the Best Edited Work at the Australian Shadows Awards. My story “Kissed by the Sun” is in DRH along with a bunch of truly brilliant stories including my favourites: Shona Husks’ “Mutiny on the Scarborough”, Angela Slatter’s “Sun Falls”, Jeremy Saddler’s “Such is Life”, Felicity Dowker’s “Red Delicious”, Patty Jansen’s “Quarantine”, Joanne Anderton’s “Sea At Night”, Jason Nahrung’s “Children of the Cane” and Damon Cavalchini’s “Renfield’s Wife”.

I had the pleasure of talking to Greg McQueen (one of my heroes!) several weeks ago about digital publishing, relationship building and the cost of going Amazon Kindle for eP’s anthologies, plus a whole heap of other things in the penultimate podcast for his degree.

Gratefully Greg was a super kind host (I could honestly chat to Greg for hours) and despite the fact he threw in a few curve balls, and perhaps because he’s a consummate audio editor, I came out sounding vaguely like I know one or two things. Next time though I will wear my headset so I can bob about without hampering the audio quality at my end.

Last week was the first week of Literary Mix Tapes’ BOOT CAMP, embarking (for me) into the big black unknown of script writing, with nine other mates. I’m not a visual person… my stories are generally auditory or emotive, so it’s been a challenge to try and conceptualise and then articulate, what I want someone else’s story to look like on the screen. Just ask any of our cover artists who has worked with me, how much I struggle to tell someone what I want visually.

The story I am adapting is Lily Mulholland’s “Grey, Like Stone” and she’s been awesome in helping me wrap my head around the main characters and his motivations. Tonight I hung out on Google Earth and got a feel for the area the story is set in. This included a very unsettling moment of virtually walking Apollo Road… the same road Sean walks in the story/script.

This month Paul dragged us through the last of the truly difficult wringers to talk about what obstacles we face and overcome to write. I talk about my issues with trust and how I’m facing up to them (jeez, I have to say, this year seems to be a fast track of self improvement as a writer and no lingering on the sidelines watching a literary life pass me by). I also wrote about The Rabbit Hole (and that got me thinking… perhaps Write Anything could have a Rabbit Hole one day).

Speaking of The Rabbit Hole, I got just over 20,000 words for the weekend. I was pleased, though I wanted another two hours to wrap up my novella ELYORA. Had I had several more hours where I churned out over 1700 words earlier on in the weekend, I would easily have completed the novella and perhaps nipped at the heels of 30,000 words.

I had planned to write the first five chapters of my novel BYRTHED, but Saturday proved to be harder than I thought it might be. Two weeks of hammering massive deadlines, late nights and the inevitable come down from the adrenalin high of Friday night, made Saturday morning struggle street amplified to the power of 100. Mid-afternoon I pulled up ELYORA (a short story I started in August last year, that I knew was never going to be content being short) after Peter told us there was a publishing opportunity for those of us writing shorts or novellas during The Rabbit Hole.

So I have a potential home for ELYORA, currently sitting at 19,000 words and several thousand words from THE END. I love the way the story has come together, and all the things I’ve learned about it as I’ve gone along (like waiting until Saturday night, almost ten months after I started writing to know what the underlying premise of the township). I can’t wait to dive into the second draft and pull all those threads together, refine the story line and hopefully deliver on kick-arse novella on the 27th July.

I have to say a big thank you to my beta readers who have agreed to take on the 20,000 beta reading challenge… Chris, Dan and Laura, with Stacey there on the sidelines for extra support.

…So that’s what I’ve been up to, and between ELYORA and BOOT CAMP, I’ll have plenty to keep me out of trouble for the next fortnight or so before we leave for our annual holiday in the mountains (ironically where I dreamed the original storyline for ELYORA!) To say I can’t wait, is really underplaying it.

What have you been up to since you were last here?