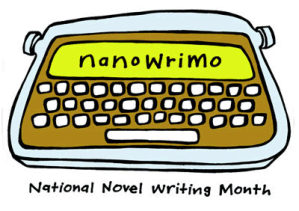 It’s time. Time to return to the madness that is the National Novel Writing Month.

Last year I had spent most of the year writing and had just completed the final edits on Elyora/River of Bones and didn’t feel NaNo was the thing for me. I also spent the first ten days travelling and I just wanted to enjoy the time away. In 2011, NaNo was the straw that broke the camel’s back (so to speak). When I had to concede I just couldn’t write and I pulled the pin less than half way through it was like pulling the pin on a hand grenade and I imploded. It was the start of the second serious bout of depression I suffered through in 2011.

Ironically, what I wrote in the year I didn’t ‘win’ provided the only published work from a NaNo adventure to date. A section of the opening story in Seeker Lover Keeper became the vignette ‘Intersected’ published in the first issue of Vine Leaves Literary Journal.

So this year, I’d been toying for a bit as to what November would hold for me. Would I? Wouldn’t I? It was seeing that Rus Vanwestervelt was planning on doing it, that pushed me over the line. I needed a writing buddy. Someone I could confide the dark corners of the story to. Someone I know who will be an awesome inspiration. And that’s Rus and more.

The plan is to write a novella length adaptation of my steampunk romance ‘Between Minutes’. From my NaNo pages:

A passionate love affair.
An impossible house.
The opportunity of a life time.

The six-week creative programme offered at “Dalhousie” is like no other in the world. Tabitha’s offer of a place in the programme is the opportunity she and her secret lover, Christian, have dreamed of. A chance to escape into a Bohemia of naked passion for music, words and each other, where the pressures and frustrations of their suburban lives have no place.

But Bohemia has its limitations. The claustrophobia of the house and it’s Victorian workings, fuelled by Christian’s obsession with the future, Tabitha’s entrenchment in the past and the competing motivations of the other residents, threaten to unhinge their sanity and commitment to each other.

When Tabitha is called to honour the undefined debt in her contract, the cost of the residency will be more than a minute of their mundane existence on the outside.

It’s not a perfect little (*cough*) blurb but it is a start. I haven’t yet decided if I will go toward the romance, happily ever after bent, or the darker horror version. The original short story walks the path between the two.

With less than half an hour until kick off I am happy to say I have:

And the best bit of all, this close to things starting… the characters have begun to talk. I always imagined it beginning with Tabitha talking with her closest friend Mish and that’s where I’ll be beginning tonight.

Throughout November I will be snapping a photo a day, noting the tshirt d’jour (sadly I don’t have 30 different ones but it will be close!) and hopefully putting up a snippet of work.

The plan is to write every day, in the morning. I know it is possible.

Now… time to go boil the kettle, do a dozen start jumps and wake myself up, ready to put the opening pages down before bed tonight.