A Reflection on Stepping Up for Brilliant Young Minds

I was so excited when we opened the first unit of English in Term 4 last year and found it was poetry. Disillusionment set in rather quickly when I discovered all the exercises were centred on adaptation of existing poetry. It was only a few weeks after the allegations of plagiarism had been levelled at Graham Nunn and several other poets. It seemed to me that Ed Queensland were actually endorsing a process seen in other professional circles as the worst kind of creative theft.

While the poetry unit taught the nuances of rhyme, alliteration, onomatopoeia and rhythm, students were given no freedom or opportunity to explore these parameters independently; to create their own original poems. There was also the issue of repetition. Across five weeks they were expected to complete five adaptations, the final one the assessment item.

I had to sell the final piece to my son as an opportunity to write a rap, to create some beats and perform it; it was the only way to engage him with the material and the process by that point. As to be expected, he rose to the challenge but then refused to submit his rapped poem as the assessment piece because he was afraid he would be failed for doing something different.

PULLING ON MY RANTY PANTS

It’s hard not to be critical when you are the one on the ground delivering something you see as inherently defective, both as a creative individual and as someone who wields words for a living.

Anyone who is a Facebook friend or who follows me on Twitter will know I was very vocal and critical throughout the unit. This was very out of character for me. I am loath to be critical of anything I feel I am unable to offer an alternative for or to be an effective vehicle of change against.

I considered writing a letter to BDSE about the unit but was told they draw their material directly from the National Curriculum. All the angry letters in the world weren’t going to change it. All I could do was try and fill the gaps as best I could (which I was able to do because I was the home tutor!) and to let my friends who are writers and poets know what was going on at the grassroots level. To get them investigating how poetry and creative writing were being taught to their kids.

IT’S NOT A TICK THE BOX

I believe whoever put together the Grade 3 poetry unit last year had no imagination, no passion or appreciate for poetry. Like much of mainstream schooling, it’s all about ticking a particular series of boxes. Unfortunately creativity is not considered a box important enough to include, let alone tick.

When I mentioned this to an old friend, who has been a teacher for almost 20 years, she said there is so much to get through in the curriculum and the pressure on teachers to get through it is so enormous there is no time for creativity. So I asked where kids get to explore creativity. At home, was the answer.

Students are encouraged to excel in science, in sport, they can excel in any particular subject area, but few (and in many instances no) opportunities exist to excel in being creative. And no, being creative is not simply about opting to do art or drama or music.

ONLY EXPERTS PAST THIS POINT

Last week I had a long conversation on Twitter with Adam about the parental role in education. It was long and many faceted dissection of a complex interaction. Much of the responsibility to address issues faced by children and young people has been abdicated by parents and forced on teachers, in a parenting culture that, from an early age, outsources primary care of children beyond the family home.

I absolutely agree with Adam that teachers deserve more recognition, more respect and more support. And I agree parents need to step up, rather than step back and point. However the system negates much of the potential parents have to offer to participate in their children’s education beyond getting their kids to school, helping them with their homework, coming in to help with reading when students are young, do a ‘job talk’ and other auxiliary, but ‘parallel’ roles dictated by the P&C.

In short, parents are not seen as co-educators. Teachers are seen as the sole professionals in the area and parents to defer to them, rather than work in conjunction with them to achieve excellent educational outcomes. (Adam pointed out that this requires an entirely different and complete discussion as to how this came to be?)

I admit, I trusted the system to know what was best for my son. I was engaged as I could be: helped in tuckshop, did reading groups, did a class talk on publishing, sorted the class readers every week, attended parent teacher nights and went to parade as often as I could, sold sausages on election day, donated prizes each year for raffles, attended fundraisers, did everything short of attending P&C meetings (and that was a conscious decision after years of burn out in other volunteer capacities). The thing was, I was on the periphery of the every day function of the classroom. It was clearly delineated what the expectation of parents were and I did my best to step up.

That was until things fell apart and we needed help. Over 12 months the trust I had in the system, and a mainstream school’s ability to help, diminished until it was suggested that we leave, enroll in distance education while we sorted out our son’s issues. I was forced to step up and become responsible for my son’s education.

Once I was a home tutor, and charged with the responsibility of delivering the national curriculum, I had the chance to have an intimate relationship with the content. I got to finally set foot in ‘the classroom’. I got to review and form an opinion on the strengths and weaknesses. How it might work better in a classroom, rather than a kitchen table, and visa versa, how difficult teaching is. It was this chance to interface with the material that got me questioning and suggesting to other creatives that they too question how our children engage with English as future readers, writers, film makers, poets, critics and so forth. We need to step up and ask to be part of the process as professionals in this area, as well as parents.

It’s very different where my son goes to school now. It is a small community school of less than sixty kids. Parents aren’t just encouraged to be part of the every day school culture they are expected to be. One of the fathers take PE classes on a Friday afternoon, several of the mums do music and yoga lessons. In the morning there is always a parent in the room to help with the multi-age, multi-skill diversity of the class.

At the beginning of the year, my son’s teacher asked if I knew anything about poetry. While I’m certainly no expert, I’ve been penning a few poetic phrases of late and have a growing appreciation of the form. She asked if I would be interested in coming in once a week to teach poetry. I told her Stacey, whose daughter is in the same class, wrote more poetry than I did and she’d probably be keen to teach as well.

PUTTING DOWN ROOTS IN SOLAGE

Tuesday I shared solage, a form Wiki refuses to acknowledge. It was how I opened my spiel to them, followed on by selling it as ‘detective poetry’ – each line was a clue as to what the final word was.

Some kids caught on quickly and were prolific. Other kids were slower to wrap their head around it and produce a solid poem. A few didn’t get it, but came up with some lovely rhyming lines and engaged in rather interesting discussions about words (particularly around flies and living in poo!). Solage is not a ‘simple form’ and I was impressed to see the tenacity with which they all attempted it.

While the cats away

The opposite of play

A memory in the past

Waits by the throne

All those who completed a poem stood up to read their work to the class. It was something I am sure Cameron Semmens, as a performance poet, would have been proud of. 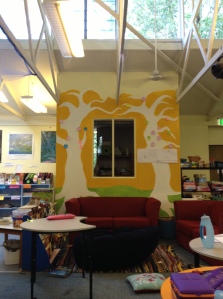 As a dyed-in-the-wool post-it note poet, I took in a stack of coloured squares and flowers and speech bubbles, invited the kids to transcribe their completed poems onto them. Then one of the girls suggested that they stick them up on the tree above their reading area.

And thus, we ended up with a solage tree. Not all the poems ended up on the wall, but a majority did. I’d love to think that over the next few weeks the tree might sprout more leaves until the glue gives way and the poems fall like autumn leaves.

ENGAGEMENT IS THE KEY

I agree education is not entertainment. But I also believe education is not all hard work. Learning is a life long experience. Learning has at its heart passion, engagement and experimentation. Most school teachers believe this too, but the system and the administration of it, has lost sight of it, focused instead on letting bureaucrats over complicate things in the quest to create quantifiable output.

I don’t expect my son’s entire class to go on to write or read poetry as teenagers or adults. What is important to me is, for an hour or so, they were all engaged in the word play, in a way that stimulated independent thought and creative exploration. They weren’t appropriating someone else’s words or thoughts and trying to shoehorn them into own. They were able to give their ideas and words a chance to free-range. To shine!

If I can share just a little of my passion with young minds and hearts, and if just one, JUST ONE, of those kids is inspired to create or keep creating, then I have made an important contribution; an investment that will keep paying forward.

DISCLAIMER: In case it is not clear, I consider there to be a clear delineation between the eduction system and teachers, as I make the same delineation between nurses, doctors, auxiliary health processionals and the health system. This post IS NOT a brow beat of teachers, but a look at a system that has created artificial fractures between its ideological framework, teaching and axillary staff, parents and community… rather than fostering an inclusive and participatory attitude of partnership in learning.

6 thoughts on “Reconsidering a Parent’s Role in Education”