One Friday evening in late 2011, Adam Byatt and Laura Meyer fell into a Twitter discussion about how they both dreamed of seeing one of their stories made into a film. This immediately piqued the interest of Devin Watson.

On the 16th of this month, the first of the films conceived after that conversation will be released.

“Golden Opportunity” is the story of the Madisons — Will (Richard Alan Reames) and Maria (Ana Maria Castenades) — a couple whose relationship is on the verge of disintegrating under the brutal religious junta governing North America (Ken Dodge plays a seriously terrifying Fedalitas commander). P.J. Kaiser penned the original story for “Nothing But Flowers: tales of post-apocalyptic love” and Emma Kerry adapted the story for screen.

Your explanation is not satisfactory.

The film owes its existence to the passion, skill, patience and perseverance of Devin Watson (director) and Dustin Masters (director of photography). Dustin became enamoured with “Golden Opportunity” early on and his persistent interest kept the script front and centre of a larger project. 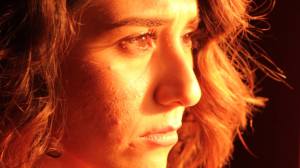 The squads are getting closer every night.

Kudos are due Devin, who put his money, time and efforts into bringing the story to the screen. Mike Bruno’s score, John Rackham’s voice over and some amazing composite shots round out what is an amazing visual transformation for PJ’s story.

Things had gone so very wrong. First the world went wrong and then somehow they had gone wrong.

Being part of a film has opened my eyes to a brand new way of conceptualising storytelling and working cooperatively. It’s shown me a different way of taking ideas, dreams and passions to create a new accessibility to the worlds we authors create.

Now do you believe I will do anything for you?

For now I leave you with a sneak look inside the world of “Golden Opportunity”.