Alaina of ExploringlyYours provided the questions for this round of the #tarotthursdaythree hosted by Spiral Sea Tarot.

How do you feel about the Raider-Waite-Smith pack (RWS)?

I’m ambivalent about it, to be honest. I am aware of the very important place it holds in tarot history and culture, how it’s a foundation for everything that came next in terms of modern tarot, but I’ve never been drawn to it personally as deck in and of itself.

What was your beginning deck?

I remember buying a generic deck (I still have it downstairs among my boxes of books, the cards have an incredible magenta backing) but I don’t remember when I bought the deck, who the deck is by or remember ever really using them.

I bought The Druidcraft deck to celebrate my first Mothers Day – drawn by the rich illustrations and a fledgling interest in paganism, earth-based religions and the like. All the artwork is painted with pigments set with egg yolk, as per traditional methods and they are sublime. The Lady in that pack remains one of my favourite cards. I can almost feel the green velvet of her dress when I bask in her abundance. I want her overflowing cornucopia to be mine. 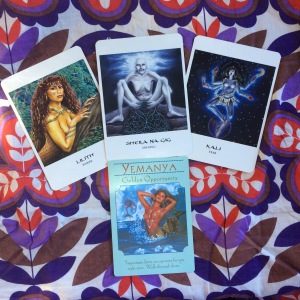 My first oracle was Doreen Virtue’s Goddess Guidance Oracle, until I accidentally set Yemanya (golden opportunities) on fire when the wind blew her into the votive I had burning on the altar in my bedroom. I was probably on the cusp of out growing the deck (as it didn’t have enough shadow cards) so it was possibly a timely burn.

Do all beginners need to start with RWS (or clone), in your opinion? Why/why not?

I’d say no, but like many people answering these questions, I’m no expert. I can only base this on my own experiences.

Start with a pack that has artwork that inspires, excites and interests you – whether that’s tarot or an oracle deck. Secondly, get a pack that aligns with a philosophy or an area of inquiry that interests you. Alongside the Druid pack I had a succession of Goddess cards (can’t have a goddess pack that doesn’t have Kali!).

A new deck is a little like a new friend. Choose one you really want to hang out and enjoy time with, grown alongside and learn from.