Sunday, I discovered a new form of poetry. A mash up between found poetry and bibliomancy. This poem is constructed from randomly chosen fragments of three different books.

Line one comes from Simon Kindt’s No Revelation, two from Tim Winton’s The Turning and three from Amanda Oalmers The Art of Asking.

This is just the first taste of what’s to come. 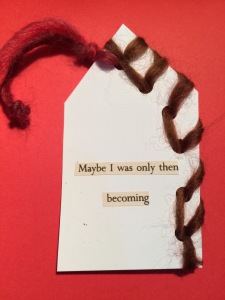 “You know you need to think of it as giving folk the opportunity of doing something that will make them feel good. You are doing them a favour really!”

Yesterday, I did two things that pushed me so far out of my comfort zone I’ll need a telescope to try and ascertain the faint smudge of its boundary if I ever choose to return there. I could say that launching my first ever mentoring program was the scariest thing I’ve done all year (maybe for the last three or four years) but it’s only the second scariest thing.

In The Art of Asking Amanda Palmer says there’s two ways to do DIY.

The first is “Minimal DIY” where you literally try to do it yourself. Where the emphasis is on total self-reliance and individuation.

The second is “Maximal DIY” which is about expansion and asking. The emphasis is on collectivism; you throw your problem out to your circles to see what solutions might arise. (Page 100)

GO YOUR OWN WAY

I have always been a Minimal DIY when it comes to business. For most of eP’s life there was me at the forefront editing, designing, launching, financing and dealing with the day-to-day challenges that arise in a left-of-centre publishing model. I was terrible at delegating. I had no money for help, so I couldn’t source additional paid help if I wanted to. I didn’t feel I could ever ask anyone for help for the love of it. It was one thing for me to do it, but another thing for others to give it. (The few months when Laura Meyer helped me with admin  — because she refused to take no for an answer — was heaven and I sorely missed her when she couldn’t offer that help any longer!)

The irony of it is that all of eP’s publications exist because of collectivism. But for whatever reason (okay I could list them all but I wont), I would never allow the collectivist approach to encroach beyond the creative stage of storytelling.

TIME FOR A CHANGE

Amanda refers to a problem in her references to DIY. My problem was: right now I am in the middle of my 105 day social media sabbatical.

To promote For the Asking I was faced with two options:

I opted for number two, the Maximal DIY approach, and spent an entire day wound up and feeling sick at the idea of emailing every close friend, every old friend, every person I have ever worked in publishing with to ask them to help me promote my new program. But I did it, because I had no other option. In reality, number one never existed.

AND IT PAYS BOTH WAYS

Years ago, my friend and colleague, Janette Dalgliesh, said I had a responsibility as the head of my business to lead by example, to be a role model for those who worked with me. At the time it was in regards to ensuring I was completely honest with the people I worked with about how I was coping and for me to care and put myself  first (especially with my mental health), get plenty of rest and to pause projects when I needed periods of down time to get well.

If this was the expectation I set for myself, if this was how I treated myself then not only did it encourage others to treat themselves the same way, it instilled confidence that they would receive the same understanding and allowances if they found themselves in a similar position while working for me.

Yesterday I thought of her again. I knew that by stepping out and asking, I was giving other friends, other writers, other creatives ‘permission’ to ask too. The confidence to say: could you lend a hand? If I could do it, then they could do it too. I don’t just want to be be part of a culture of generosity, of always being willing to help, and giving where I can, I want to be part of a culture brave enough, and stubborn enough (to get over themselves) to ask.

It’s something I know I have to learn to do. This is the beginning. Not the end.

Maybe now I am starting to ‘become’. I hope so.

What is one thing you want to ask help with but are scared to?