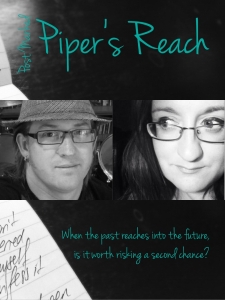 Last week I wrote about the process of honing the first page and the angst of marrying a non-traditional narrative with a traditional narrative framework to hook the reader. I had been reviewing the opening page in preparation for submitting to Marcy Hatch and Dianne Salerni’s “First Impressions” and agonising over the fit. Wondering if Piper’s Reach was appealing to those outside of our existing fan base. Dreading feedback that said we’d got it all wrong. After reading the comments on both Marcy and Dianne’s blog I know now why I was so worried.

Kittie Howard commented: There’s no middle ground with epistolary writing. It either hits or misses.

“What’s great about this first page is that it sets up lots of questions about the past between these two people but also suggests a question about the future. Why is the narrator writing to Jude now, twenty years later?” Marcy.

I never really thought about why the twenty year gap (I was thinking of all the other whys) or the inherent question regarding the future (even though we set up the original tagline as: When the past reaches into the present would you risk a second chance.)

There’s just the right amount of past and present mixed together, and enough places mentioned to provide a clear image of setting without being confusing. Dianne

Again, I hadn’t thought too much about the setting on the first page (too worried about character and voice and conflict), even though Adam and I had spoken during the editing process about properly locating both the towns early on, something missing from the original letters.

To follow finish off Kittie’s comment: There’s no middle ground with epistolary writing. It either hits or misses. This one hits!

Alex J Cavanaugh commented: That simple letter says a lot. The authors nailed so much in just a few paragraphs.

You can read the full critiques and all the comments on Marcy’s and Dianne’s blogs, or add your own there.

Some of the readers were slightly confounded by Australian colloquialisms such as ‘sea change’ (though apparently it was Shakespeare who first coined the phrase in The Tempest!) and ‘pashed’. Adam in true Adam style explained pash in the comments and added ‘pash rash’ – oh, I’d totally forgotten that! Chatting over dinner last night Dave and I agreed ‘pash’ really does belong (rather than snog) because it is one of those iconic 70’s and 80’s teenage Australian words – those all or nothing kinds of kisses at blue light discos and school socials that traded etiquette for raw momentum. If we want to keep true to the Australian voice of the characters we will need to be mindful to accommodate an international audience in the context of those words.

There were some punctuations glitches to fix and a small tweaking of one sentence regarding ‘stuff’, which is quite shameful given years ago I walked into my soul sister’s Year 8 English class where she had written ‘stuff’ and ‘things’ on the board and was running through ways of better articulating these generic terms!

So the worry was for nothing. Easy to say in retrospect! The project overall is unique enough to pique the interest of readers and there is enough in that first letter to hook the reader in. Now to worry over the next 321 pages!

Many thanks to Marcy, Dianne and their readers. Their comments and insights have fuelled the second stage editing rocket ready for launch next week.

If you have a manuscript and are interested in being part of Marcy and Dianne’s ‘First Impressions’ drop by either of their blogs for more information.

It is hard to find anything to love about the process of getting the first page of a manuscript right. If anything I could count all the ways I hate it, but let’s keep with a positive spin?

I spent the beginning of the week revising, rewriting, revising, rewriting (and so on and so forth) the ‘first page’ of Post Marked: Piper’s Reach in anticipation of subbing that page for an online crit. Adam was ever so patient with my incessant rewrites, in supporting the changes I’d made while insisting some things remain unchanged.

I thought writing a synposis was hard work? It pales in comparison.

I look back on the opening page of Elyora and remember how many times I rewrote it, trying to get it was just right, knowing the dynamic I was setting up, the questions I wanted raised, the characters I was evoking. But the pressure was off – the novella had already been accepted for publication. Then there was the rewriting of the beginning of Elyora in its transformation into River of Bones. The opening there doesn’t even have the (obvious) main players – it exists to suck readers in, give them a quick fix via Kindle preview so they buy the book – a very different kind of beast.

And now there is Post Marked: Piper’s Reach which I oddly seem to have a greater investment in, than anything else I have ever written. I feel like the pain and angst over getting it ‘just right’ is only just beginning (that writing the original letters was the easy bit). I’m realising the difficulty inherent in writing something that is not a stock-standard narrative.

And let’s not mention it’s my words that open the novel! No pressure.

In this day and age it’s not enough to have a stellar first chapter or even five brilliant opening pages. The ability to wow and snag the initial interest of an agent or editor is reduced down to the first page. It makes honing that opening page of a short story look like a cake walk in some ways – after all, the first page of a short story might be one of ten, or twenty. Not one of 300! At least all that experience in writing short stories has given me the faith I can go for the jugular at the beginning. (And we know we’ve started the story in the right place!)

Truth be told, I was never happy with Ella-Louise’s opening letter. Rewriting it however meant I was caught between keeping true to what the original letter said and trying to hit all the narrative points for a compelling novel opening. Not to mention it still had to READ like a letter AND hit those narrative points.

OF AGENTS, EDITORS and AUTHORS

This week I read that agents and editors are looking for three things on that first page:

When you have been so close, for so long, it’s hard to know if you are hitting any of those marks.

Is there anything unique about Ella-Louise’s character voice in those first 400 words (and the 150 that come after to finish the letter?) And after all the tweaking does that opening letter now carry the same nuance of voice contained in the letters that follow? Have I inadvertently changed the voice to conform?

How much can you say about the present and the past in 400 words AND still have it sound like a missive appearing out of a two decade void? I hope there are enough questions in there to compel a page turn: why did someone who obviously meant a great deal to her not show up at a farewell party or at the bus to say good-bye. And what was going on between them that his presence would have kept her from leaving.

WHAT DO I LOVE THEN?

I love the fact I managed to get the word ‘pash’ into the first 400 words! I love the fact that for the first time ever I’m happy with the opening letter (which is 570 odd words). I believe that it keeps true to the original and contains all the necessary hooks. I think it mixes the past and present nicely with the light and dark, with just enough foreshadowing (in comparison with earlier version). But I’m on the verge of over-thinking it. I fear I’ve cut the soul out of it, I’ve been over it so many times. If it weren’t for next week’s crit I would say, please don’t let me have to look at it, much less review it, for at least a month – maybe more.

I hope no major structural suggestions come out of the critiquing process next week. It’s not just delusion – it’s the fear that the entire epistolary novel doesn’t work in this day and age. How to garner interest in an entire book based on a single page – when the second voice doesn’t even get a see in? At least when the first five pages are considered – you get both voices in their call and response.