RIVER OF BONES, my supernatural thriller, is free for the rest of the week. You can pick up your copy at Amazon UK or Amazon USA (best for Aussie readers). To coincide with the giveaway I’ve lined up a series of blog posts to take the reader behind the creepy exterior.

…in 2011, in a chalet in the middle of nowhere–a place four hours west of Brisbane called the Bunya Mountains. Amid the towering ancient Bunya Pines, and cold, howling winds, I tried to reconnect with my writing via Natalie Goldberg’s WILD MIND. While my Mr Ds were off exploring I’d spend an hour reading and work my way through the writing prompt for the day, scribbling with mad abandon in a tattered red exercise book.

In the earliest pages are two dreams: the first about an overburdened lint filter (looking back it’s the perfect metaphor for how I was feeling at the time!); the second, an epic dream in technicolour, twisted and distorted as all good dreams are. I remember waking from it knowing there was more than a kernel of a story idea.

TO DREAM, TO WRITE

Last night I dreamed about a place–with dilapidated houses. The fist one had a grand driveway and stone pillars which would have once held an impressive gate. When you looked up the hill there was nothing. You expected to see a grand old house–in good repair or falling apart–but there was nothing of the sort. At the top a neat chalet with the lights on.

Further on there were tumble down houses, over grown yards. One house was three storeys high at one end, two at the other, white weatherboard, ugly, ostentatious in the fact someone felt the need to build a third level to an extremely ordinary and ugly house.

There were men living in the town and a ramshackle service station–the old sort with a shed like store and two pumps out the front. In the drive way there was a hippie stand of food, festive flights festooning the drab surrounding giving it all a surreal look.

Walking up to the hippie food stand there were large goodie-balls rolled in coconut. I wanted to buy one but the stall holder told me they were specifically for the IT people who were coming (a hang over from finishing Snow Crash yesterday?)

In the forest there was a water hole fed by a creek and in the water hole were mermaids who lured men it to swim with them. When they did they were caught forever to live in the tiny town. There was one woman and one child–a merchild. She was forced to give up her tail to raise her child on land.

(Realised my people travelling through are musos–in an old town that breaks down. My MC is the only other woman in the town–the male band members lured there. The town of Elyora is not even on the map. The woman with the child had the name Elyora–decided it made a funky, weird sounding name. The sort you’d find in the middle of nowhere–travelling between two towns).

I unearthed the old exercise book several weeks ago. I was amazed at how much of the dream I recorded and how much of the original dream made it into RIVER OF BONES/ELYORA (anyone who has read it, will pick up the crossovers immediately). What I had forgotten were the strings of festive lights, the hippies, the goodie balls and the IT folk. Though I’m certain the wait for the IT people to arrive is probably the foundation for the Government facility on the other side of the river. Ironically anything that may have had a hint of lightness/happiness was exorcised. Well, I did set out specifically to write horror!

I’d also somehow forgotten, in the search for the perfect monster, that I’d started off with mermaids and a female mermaid forced from the river to care for her baby on land. That shocked me (how fragile the memory is!) The boy child laid unconscious foundations for  Gus and the mother’s ‘enslavement’ (being forced from the river to raise the boy) the forerunner of what waited for Jo on the other side of her fever in the Elyora homestead. Funny how things lurk even if they’ve been jettisoned from the conscious part of the brain.

With the birthpunk novellas I’m mindful of keeping some kind of recollections of the journey. Whether they’ll inform anything in the future other than my own keepsake, remains to be seen.

Do you keep a record of what you are writing? What inspired/shaped it? Do dreams inspire or inform your writing?

Download your free copy of the Aurealis shortlisted RIVER OF BONES (Elyora) now at Amazon UK or Amazon USA. For those who read the novella in it’s first incarnation as ELYORA, the new opening expands the characters of Mrs Briggs and Stanley Blessing in a stand alone piece of flash fiction.

It’s publication day for RIVER of BONES (aka ELYORA). It’s available now on Kindle UK and Kindle USA, published by Endeavour Press in the UK.

It’s October 1974 and all is not well in the town of Elyora. First the clocks stop. And men in shiny suits turn up offering payment for the inconvenience. Then the phone lines stop working. And finally, the power goes out. The trouble is, no one comes to explain that. 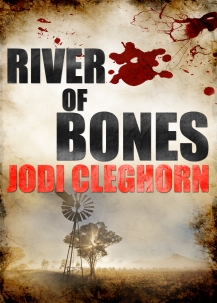 Fast forward to December 2012. Jo, Benny and Hal, members of the band Faunabate, have no idea what they’re in for when their car suddenly breaks down on the way to their first gig.

Their nearest town? Elyora. Upon arrival it quickly becomes clear that this is not your normal town. Why are all the magazines dated at 1974? Why have all of their clocks stopped? And where exactly have all the people gone?

There are some towns you don’t ever want to visit. And Elyora is one of them.  Because not everyone gets out alive…

Spawned from a dream about a creepy house and river in August 2010 and based in countless road trips along the New England highway, the original novella entitled ELYORA was originally written during the high octane vibe of the June Rabbit Hole, fueled by a Yacht Club DJ’s mix tape and deftly shaped by my crit partner Dan Powell and emerging editor Lesley Halm for publication in a special December edition of Review of Australian Fiction.

RIVER OF BONES has a brand new opening (for old readers – the characters of Mrs Briggs and Mike are revisited) but it remains the twisted road trip that takes the reader beyond the city to the country, beyond mobile service to an isolation that threatens personal autonomy. To a place where we confront the demons we create in order to save ourselves.

Add RIVER OF BONES to your Goodreads shelf.