My foray into cut up poetry began in late 2014 and over time has evolved into the poem squares that are available for sale at Etsy.

A beloved friend’s copy of her beloved “Six Memos for the Next Millennium” was left in my satchel with a peanut butter biscuit. Our two-year-old Spoodle got through most of the front cover and 6 or so pages before he realised it only smelled of peanut butter biscuit. I didn’t have the heart to throw the book out. In August that year I made a post card from the bits of the cover that remained, and it flew to Melbourne, with an apology: sorry, the dog ate Calvino. Even after confessing, I couldn’t throw away the book.

A year later, I was making a postcard for the same friend, weaving paper as pain relief. The final product needed something to make it ‘pop’. I had been playing with different ways of doing cut up poetry and grabbed the mauled book, used bibliomancy to choose a page, and built a poem from snippets I cut from the page. It was the very first poem square.

In 2016 I used Post It Note Poetry month (#pinp16 on Twitter) to see if it was possible to build a poem a day and to do it under a quasi-commission set up. At the end of February I’d built over 40 poems, with friends and strangers picking page numbers as a ‘prompt’. Mid-2016 I began pairing poetry with zentangle art I’d been drawing as sleep therapy.

The Turquoise Series is the first of the zentangled poem squares. The series consists of 10 poems.

Each poem square is one of a kind: 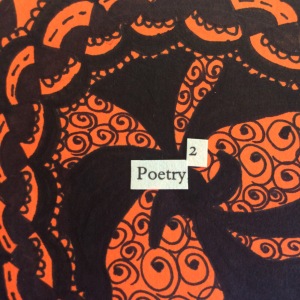 Poetry2 is my Etsy Store were you can find all the poem squares gathered together in the one place. It is also the place where you can commission a poem or organise the creation of a bibliomancy poem.