In November 2011 I sat in a cafe with Tiggy Johnson, shell shocked. I was still coming to terms with the fact I was creatively burnt out and severely depressed (for the second time in less than six months). I’d just dropped out of NaNoWriMo for the first time ever and felt like the world had dropped out from underneath. Writing, my life blood, had dried up. There was no passion, there was no momentum, there was no nothing. It was rock bottom.

“How do you write haiku?” I asked off hand, in between sips of tea.

Haiku seemed small, doable compared to an anthology or even a piece of flash fiction. I’d never quite nailed my understanding of the formula with the syllables and lines and what not.

Tiggy explained the basics of it to me – including the difference between haiku and senryu and the fact that English haiku is different to Japanese haiku in that it doesn’t necessarily abide by the same rules of syllables.

On the way home I started to play with images and words and ways of creating double meaning between to two of them. And for two months, during my “down time”, while I languished in the bottom of my well, I started to look at the world through the eyes of haiku. It didn’t matter if what I wrote was bad. I didn’t really care. It had me experiencing the world afresh.

In February last year I participated in the 29 Days of Haiku. I didn’t write every day but I came out of it with 29 poems. Some truly atrocious, others not too bad.

Last week Adam and I were talking. I suggested we do a month of “bad poetry” – just as something different. A bit of lark. And somewhere along the line it grew into “Post It Note Poetry Month” or #postitnotepoetry – whereby all poetry written had to be contained to the size of a post it note. It didn’t have to be excellent poetry, it didn’t even have to be decent poetry – it just had to appear on a post it note every day and shared. Bad poetry totally acceptable.

I remember last year it took me forever to pen my first haiku. Ironically the starter poem for this year and last year was to do with storms. It was embarrassing this morning (then later this afternoon) how many lines were scrubbed out, rewritten, scrubbed out again. Really – how many times can you write a single line of three words and include “patchwork quilt” in it. 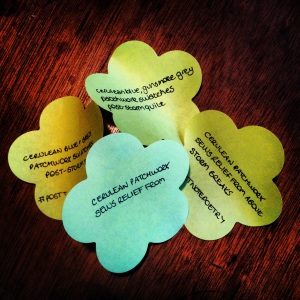 I showed my first poem to Dave tonight, stuck up on the wall of my writing room. He walked away without saying anything.

“It sucks doesn’t it. I know it sucks because you’re not saying anything.”

“I don’t think poetry is your thing,” he said.

And that’s the whole point of Post It Note Poetry Month. Poetry is absolutely not my thing. But I enjoy it for one month a year when I give myself full reign to be utterly terrible at something. And it looks as though I’m off to a fine start. 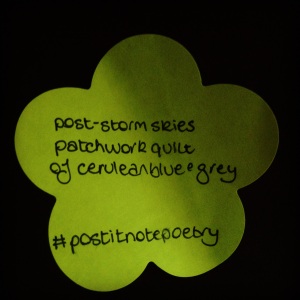 Check out Adam’s offering (in my opinion a stellar debut and totally debunking the idea of a month of bad poetry…I’ll have to work extra hard on my end to produce atrocious poetry!)

8 thoughts on “Post It Note Poetry: A Month Of”