In the last 24 hours the odd itchy bites on my back have developed into shingles. At the moment they are not particularly painful (insanely itchy, yes) but enough discomfort to warrant some kind of escapism.

I decided that I’d sit and make Kim a postcard. It’s been a long time since a hand created card was added to the postcardia project. I’d had a hankering for a while to do some more paper weaving.

One thing lead to another and I ended up with something that was part art, part poetry, part bibliomancy and part correspondence. It’s a little Japanese, a little Italian-Cuban, a little suburban Australian. 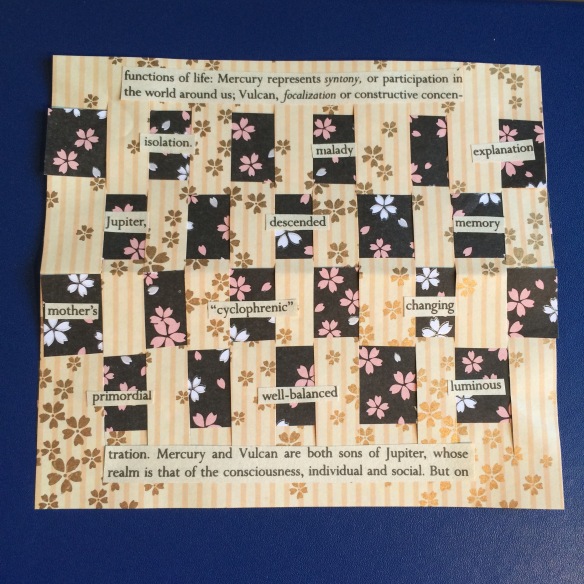 It’s as pure an example of magic as I can think of. If you consider the equation for magic as posited by Barbara Moore in the Steampunk Tarot: Magic = will + skill + connection. (Something specific was definitely being channelled through in the words!! ) It also looks kind of pretty too.

Today is the start of what could potentially be a long and painful illness. So perhaps this might be the first of many magic little paper squares to appear here. Even if illness doesn’t have me seeking respite in creation, I don’t think this is the last of these squares I’ll make! 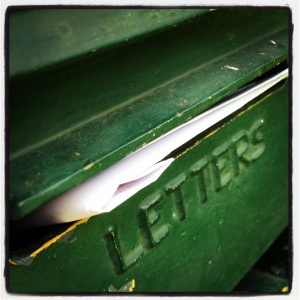 Tasmanian indie publisher Transportation Press’s new project  is a joint undertaking with Iranian-American writer-editor Shirindokht Nourmanesh and Twitch Tasmania. “The Letter Project” seeks to create a dialogue between one part of the world and another. I was chuffed to arrive home from holidays this afternoon to find my letter had been published earlier in the week while I was far from Brisbane, internet or mobile phone service.

To Wish A Letter Into Being

Have you ever been asked to write a letter to you in the past?

It’s one of the sappy kinds of self help exercises I’ve always detested. But somehow, in the last few years I’ve found myself wishing I could actually write a letter to teenage me, a way of saying “hey, there’s all this juicy, awesome stuff in the future. Hang in there” rather than needing or wanting to impart my hard won knowledge *cough* and wisdom *cough* (which I assume is the reason behind the letter as an exercise).

I’ve really just wanted to say, “Hey, here in the future, you get the things you want. They’re just not in the shape you want or expect them or in the time frame you wish it would happen. But it’s all here.”

Other than the actual practical ability to do so, the idea of sending a letter such as this into the past is based on a couple of assumptions :

Ah, but what if they are all erroneous assumptions and the tech was two-way?

“Dear You” is a semi-fictious, semi tongue-in-cheek, semi-autobiographical piece that opens:

(I’m not addressing this to “Future Me” because I’m not any version of you.)

And what the hell do you mean by “be patient…

I have Kris’s gentle nudges to thank for making me sit and write while on holiday and with only a very basic smidgen of an idea to fly a letter by the pants of.

You can read Kris’s letter here, and there’s also a letter by S.G. Larner, plus half a dozen other great pieces of epistolary writing.

And… because I am only a small way through my social media sabbatical I need your help. It transpires, getting the word out about your work without social media is the proverbial silent scream.

So… If you have a minute, please share “Dear You” on Facebook or Twitter. Transportation Press makes it simple with a bunch of social media icons on the bottom of the letter page.

And before you leave… would you or wouldn’t you write a letter to past you if the technology was available?